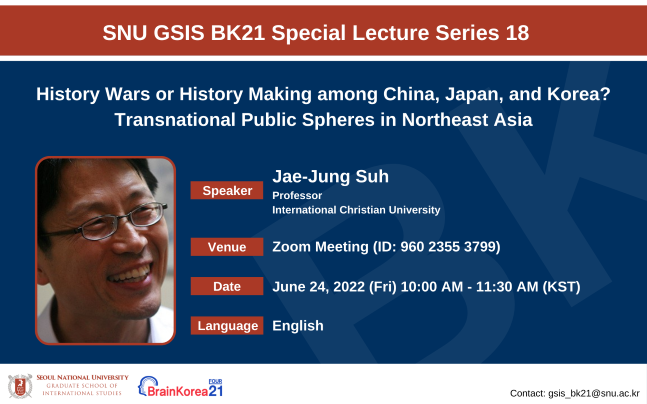 For our eighteenth session, we are inviting Professor Jae-Jung Suh from International Christian University.

He will talk on the theme of "History Wars or History Making among China, Japan, and Korea? Transnational Public Spheres in Northeast Asia."

The region of Northeast Asia seems haunted by a specter, the specter of the past. Despite a dramatic rise of transactions and integration among the economies in the region, political cooperation among the nations remains hampered by suspicion and animosity stemming from divergent or even contradictory memories of the early 20th century. Why are the Asian nations seemingly perennially entangled in disputes about the past in a way that seems irrational and even counterproductive? Or are they? Is it instead possible that they are engaged in dialogues, sometimes contentious but other times convergent, about their identities and their respective visions for the region, speaking about their shared past to audiences inside and outside their territorial boundaries to generate and transform a transnational discursive space? By revisiting the history of the history wars from a perspective of transnational public spheres, I show how the peoples in Northeast Asia have engaged each other, across their national boundaries, in public deliberations about what they make of the shared past as well as how the nature of their public engagement has gone through significant variations. I develop the concept of “regional orders” to capture characteristics of their transnational deliberations as well as to highlight their variations across time. Their deliberations on the past may look like history wars but may also be implicated in history making.

Participation is mandatory for BK Fellows (absence in BK events may affect next semester's selection).