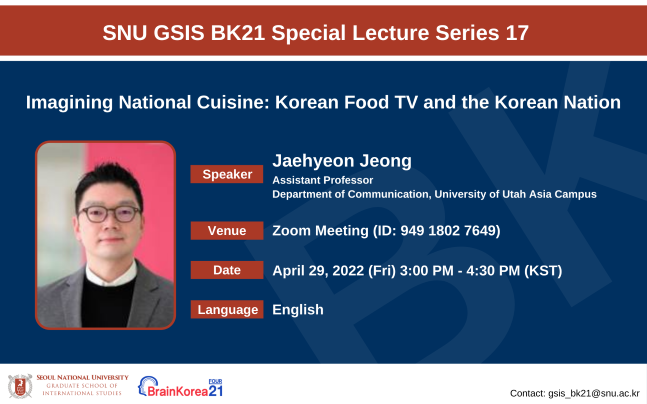 For our seventeenth session, we are inviting Professor Jaehyeon Jeong from University of Utah Asia Campus, Department of Communication.

He will talk on the theme of "Imagining National Cuisine: Korean Food TV and the Korean Nation."

Food television does not simply deliver cooking instruction or food information to its audiences. It rather inscribes ideological meanings in the social, cultural, and economic practices with regards to food production, preparation, and consumption, and it provides the viewers with particular knowledge about food and foodways. By analyzing the conjuncture of food, television, and nation, Jaehyeon Jeong discusses the semantic and ideological roles of food television within a context of (gastro)nationalism. Specifically, he reveals how the state appropriates the banality of food to raise South Korea’s global image and how it utilizes domestic television to disseminate statist discourse of the nation. Understanding discourses of national cuisine as reflective of and formative of discourses of the nation, he argues that the growth of discourses of national cuisine is symptomatic of the struggle for nationness in a globalized world.

Participation is mandatory for BK Fellows (absence in BK events may affect next semester's selection).