[신성호 교수]Missiles and the Coronavirus in Spring 2020: New Hope for Diplomacy on the Korean Peninsula?


Missiles and the Coronavirus in Spring 2020: New Hope for Diplomacy on the Korean Peninsula?

Since the coronavirus (COVID-19) pandemic, South Korea has become a subject of international media coverage, not in relation to North Korea, but because of its successful handling of the virus outbreak. Professor Seong-ho Sheen of Graduate School of International Studies at Seoul National University suggests that the coronavirus may bring a new dynamic for the trilateral negotiation between the two Koreas and the U.S.  Furthermore, he argues that with South Korea as an international model for responding effectively to the coronavirus outbreak, North Korea and the U.S. may wish to pursue discussions through South Korea rather than excluding it from the negotiation table.  Professor Sheen argues that it is time for North Korea to make a call to South Korea as Trump recently did to Moon.

As the international community continues to fight the fast-spreading coronavirus (COVID-19) pandemic, Korea has once again, become a subject of international media coverage. This time, the attention is not centered on North Korean nuclear provocation, but instead on South Korea as a model case for handling the outbreak of the virus. Despite its early spike of the virus, South Korea’s aggressive efforts to identify, confine, and control its spread with creative initiatives such as drive-in and walk thru testing have contributed to a very low death toll and a drastic slow-down in the rate of newly confirmed cases.

The special media attention on South Korea is because its success in containing the virus has been made possible without the use of draconian measures including total lockdowns of its cities and ban on international travel in and out of the country. Instead South Korea took proactive approaches such as comprehensive testing, aggressive identification and targeted quarantine measures of both confirmed patients and potential cohorts, transparent information sharing, coupled with a nation-wide voluntary movement of social distancing adopted by the public.

So far, there have not been a single case of national- or local-level lockdowns, panic buying of toilet paper and groceries, or stories of overwhelmed hospital and medical staff. As such, life has been pretty normal for people in South Korea in most parts of the country although the government has demanded that schools—ranging from kindergartens to universities—remain closed until early April. As such South Korea is schedule to have a four-year term national general election in mid -April to continue on with its democratic practice.

Meanwhile, North Korea claims it is free from the COVID-19 pandemic. In early January, North Korea swiftly declared a travel ban to and from China even at the risk of cutting ties with Beijing, which is a valued source of trade and cash flow for the much isolated economy under international sanctions. Despite North Korea’s claims, some still suspect that there are hidden cases of the virus as experts believe Pyongyang’s healthcare system and its population are most vulnerable to any pandemic. In March, North Korean leader Kim Jong-un gave a direct order for the construction of a “modern general hospital” to be completed by this October in Pyongyang to “better protect the precious health and safety of people.”

At the same time, Kim also kept himself busy with the usual military drills coupled with short-range ballistic missile launches. The military exercises and missile tests were an apparent show of force by Kim who had earlier vowed to bolster his “strategic weapons” and warned of a “shocking action” over now-stalled nuclear negotiations with Trump. The latest missiles launches have been the first confirmed cases of North Korean weapons testing since late November.

And when South Korea’s presidential office expressed concern and urged to stop acts that don’t help reduce military animosities, the statement issued by Kim Yo-Jong, dear leader’s powerful sister and a key person for Kim’s summit diplomacy with President Moon Jae-In, sharply condemned Seoul as a “frightened barking dog,” and “a burnt child dreading fire.” While highlighting recent military buildup and weapons development by South Korea, the statement ended with questioning how Seoul’s words and actions could be “so perfectly foolish.”

Kim Yo-Jong’s harsh rhetoric reflects Pyongyang’s growing frustration and resentment towards Seoul which, they see, is losing value as a mediator and partner for nuclear talks after its disappointing Hanoi summit with Trump last year. In response, South Korea’s Unification Ministry, which is in charge of inter-Korean affairs, stated that the two Koreas should maintain mutual respect while working toward establishing peace on the Korean Peninsula. 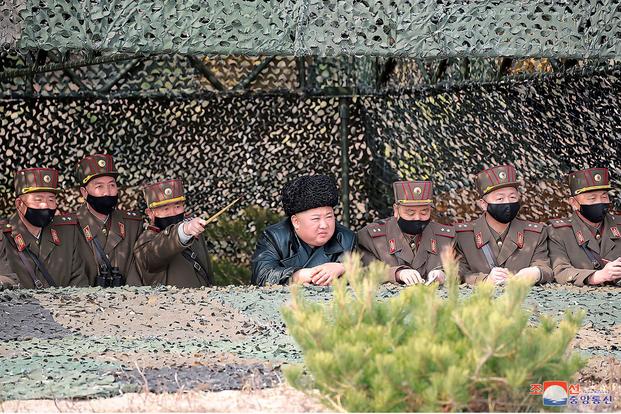 Despite Kim Yo-Jong’s harsh rhetoric, the coronavirus may provide a new dynamic for future denuclearization talks and peace negotiations between Pyongyang, Seoul and Washington. Earlier in March, Moon offered North Korea assistance in disease prevention efforts against the virus.  And less than two days after the harsh statement from Kim’s sister, the Moon’s office revealed a letter from Chairman Kim expressing his best wishes for South Korea’s epidemic situation.

And lately Pyongyang said it received a personal letter from President Trump expressing his willingness to help with "anti-epidemic work." The following statement issued by Kim Yo-Jong again, praised the letter as "efforts to keep the good relations” with Kim, while also adding that their good personal relationship is not enough, as a hiatus in disarmament talks drags on.

With US Presidential election in coming November, there seemed to be little hope for negotiation between Pyongyang and Washington as they were blaming each other for lack of interests and concessions. Yet, Trump’s latest letter adds more interesting dynamics to this “coronavirus letter diplomacy” between the three leaders since their dramatic meeting at Panmunjum last June. The UN Security Council also announced that it would make humanitarian exemptions to sanctions on North Korea to help it fight the coronavirus.

It would be an interesting twist if coronavirus gave a new life for largely dead nuclear negotiations before too long. Both Washington and Pyongyang may want to talk through Seoul first who now knows a thing or two when it comes to anti-virus fight. Indeed, in a latest development yet, President Trump made a phone call to Moon asking for South Korea’s help with US pandemic situation. It is now time for Kim to call Moon.

Seong-Ho Sheen is a professor and director of International Security Center(ISC) at Graduate School of International Studies at Seoul National University. He is also a member of Policy Advisory Board of Ministry of Defense, Republic of Korea.

Commentary 30_Missiles and the Coronavirus in Spring 2020 New Hope for Diplo.pdf 0.5MB